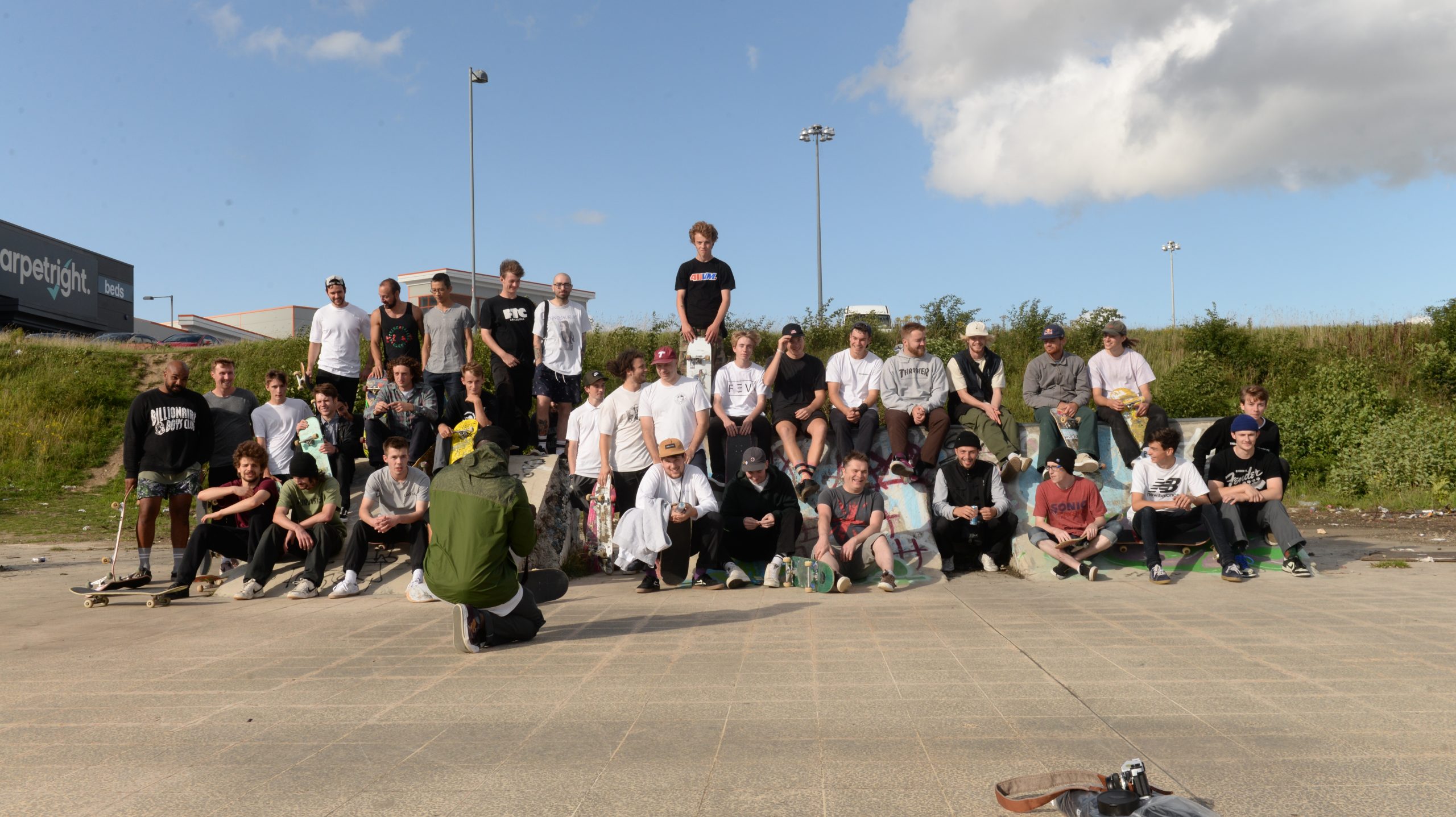 Black Spell takes its inspiration from board sports culture and the arts. As part of an ongoing ‘Community Feature’ series here at blackspell.co.uk, we’re going to highlight some of the other creatives we have the pleasure of working along side. This is your chance to get to know a little more about the people and processes behind the art; the riders, artists, photographers, makers, creators and collaborators.

Shred The North is a collective of skateboarders from the North East of England who promote and facilitate skateboarding activities and events in the area. We spoke to Dave Apomah from Shred The North this week to learn a little more about the history of the project.

Tell us a little bit about yourself?

Yes mate! Dave Apomah here. Almost 40 year old resident of Washington, Tyne and Wear. I’ve been skating for over half that time. My hobbies are skateboarding, recovering from skate injuries, trying to stay fit so I can skateboard more, being too busy with skate projects to actually skate, planning skateboard road trips (and other skate related events) and doing dad stuff, pretty much.

What is Shred The North and how did it start?

We’re a grassroots skateboard movement trying to raise the profile of skateboarding in the North East and grow our already outstanding community.  Shred The North was started because at the time, we seemed to have a fragmented North East skate scene. There weren’t any local skate events and there also wasn’t much exposure for north east skateboarding. 4 Motion Skatepark had just opened so it seems like the right time to kick of an annual skate event. It kinda grew from there.

How long has Shred The North been going now?

Since December 2014, when we had our first #TyneTeesSlamJam at 4 Motion skatepark in Darlington. You can watch an edit from the day here.

What are you up to when you’re not working on Shred The North?

Family, work and other skate related projects. Also, some actual skateboarding if and when the stars align.

Who else do you collaborate with in order to bring Shred The North to life?

It’s a long list but I’ll try and show love to the people who’ve helped us massively over the years (sorry in advance to anyone I have missed out):

Skate Parks – 4 Motion Skatepark in Darlington for the majority of our skatepark projects and more recently Override Skatepark in Jarrow.

We also heavily involved with our local DIY parks – Moon Goons DIY & Newcastle Wasteland as well as 5 Bridges in Gateshead.

The following individuals have also helped massively to help us get to where we are today (and a tonne of others).

We’ve also had a tonne of skate social events at Arch Sixteen Café in Gateshead before its demise this year. Shout out to Pam for making that happen! Forever grateful for the opportunity.

Tell us what the last Shred The North event was, how did it go down?

The last event was our Bingo Jam in February 2020. It was a celebration of a good friend of ours (Steve “Bingo” Binks), who sadly passed away nine and half years ago. He was a cornerstone of the north east (and UK) skate scene and a definite inspiration for what Shred the North stands for today. We managed to raise some money for The British Heart Foundation (Massive thanks to Nigel at 4 Motion Skatepark, Andrew Pike and Connor Stokes for this). Looking forward to doing this again next year.

What’s next on the cards for Shred The North?

With the pandemic putting a hold on our activities, we’ve switched focus to work more on improving skate infrastructure in the North East. A tall order as there aren’t many decent council-built parks around, depending on where you live. We’re also focusing more on our skate schools. Also, less events, more actual skateboarding, for the foreseeable future. That being said, we’re hoping to be able to run our #TyneTeesSlamJam at the end of the year again.

Last month, we went along to 4Motion Skatepark in Darlington for Shred The North’s annual Slam Jam. A strong turnout for the day, mixed with some excellent skateboarding and an all around sense of community made for another very successful event! Here’s our video edit from the day. @shredthenorth @4motion_darlington @nativeskate @legacyskatestore @gsne_ @skateboard.england @tumble97 #blackspell #blackink #skateboarding #streetwear #apparel #skateuk #team #flow #skatejam #skatevideo #northeast #community

Yes peeps. A lot of people have been asking about more zines and t-shirts. These are in the works and we’re hoping to get our hands on a fresh batch within the next few weeks. We’ll let everyone know when they land. Sorry we couldn’t accommodate all the requests. They literally flew out within the first hour 🙏❤️🙏but fear not. More radness #ForBingo will be with you soon. In the mean time, don’t stop pushing the plank for the big guy and thanks again to everyone involved in Sunday’s jam. We’ll do a proper thank you post soon. Much love! 👊😎🔥🛹🔥 #ShredTheNorth #MischiefForever

Get in touch if you’re down for pushing Skateboarding in the North East (pun totally intended).

This site uses Akismet to reduce spam. Learn how your comment data is processed.

No products in the basket.

We use cookies on our website to give you the most relevant experience by remembering your preferences and repeat visits. By clicking “Accept”, you consent to the use of ALL the cookies.
PRIVACY POLICYACCEPT
Manage consent

This website uses cookies to improve your experience while you navigate through the website. Out of these, the cookies that are categorized as necessary are stored on your browser as they are essential for the working of basic functionalities of the website. We also use third-party cookies that help us analyze and understand how you use this website. These cookies will be stored in your browser only with your consent. You also have the option to opt-out of these cookies. But opting out of some of these cookies may affect your browsing experience.
Necessary Always Enabled

Any cookies that may not be particularly necessary for the website to function and is used specifically to collect user personal data via analytics, ads, other embedded contents are termed as non-necessary cookies. It is mandatory to procure user consent prior to running these cookies on your website.